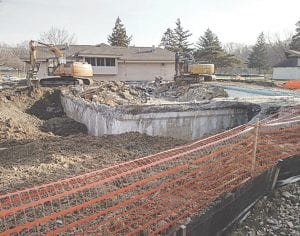 FLUSHING — After being closed to residents for many years, Flushing’s iconic Tucker Pool has finally been demolished.

Tucker Pool, a public swimming pool located in Riverview Park, was torn down and filled in by crews late last month, capping off a demolition process that had been in the making for the past two years.

Community Development Block Grant (CDBG) funds were used by the city to demolish the pool, which had served the Flushing community for five decades before its closure around a decade ago.

Though once a hotspot for summertime fun in Flushing, Tucker Pool gradually fell into a state of disrepair and became a less popular draw for locals over the years. Greg Palinksy, a long-time Flushing

Recreation committee member, said that high maintenance costs also prompted the city to shut down the pool and eventually demolish it.

“At the time (of its closure), the pool was costing the city approximately $30,000 a year to operate,” Palinksy said. “It also wasn’t being utilized by many city residents any longer. Back in its heyday, the pool was a great way for kids to escape the heat, and many families had year-round passes. But that all faded once people started getting their own pools and air conditioning became more common.” 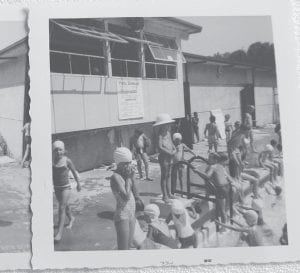 Tucker Pool—also called the Tucker Memorial Pool—was named in honor of Max Tucker, a Flushing-born philanthropist who made his fortune in the Pacific Northwest lumber industry during the 1940s. Upon his death in 1950, Tucker bequeathed $100,000 to the Village of Flushing, along with a four-acre section of property near the intersection of Main and Chamberlain streets, according to an article in “The Flushing Observer.”

While the property was later developed for the current Flushing City Hall and the Flushing police and fire departments, the village council used funds from the donation in Tucker’s will to construct the pool in the mid-1950s. Tucker Pool was officially dedicated on July 1, 1956.

During its prime, Tucker Pool proved to be a huge recreational draw for many families in the Flushing and Flint areas. In 1956 alone, the pool drew over 18,000 users, as reported by “The Flushing Observer.” Several generations of local children also learned to swim for the first time in Tucker Pool.

In addition to hosting swimming lessons, Tucker Pool also sponsored a variety of events for all age groups, such as its 1957 “water carnival” that featured everything from water ballet to clown diving to distance swimming and diving competitions.

Although Tucker Pool is now gone, the pool’s storage building has been left standing. Flushing City Parks and Recreation members, along with city officials, have expressed interest in renovating and reutilizing the structure for future recreational use.

Information on Parks and Rec’s vision plan for the Tucker Pool storage building will be included in a future edition of “The Flushing View.”